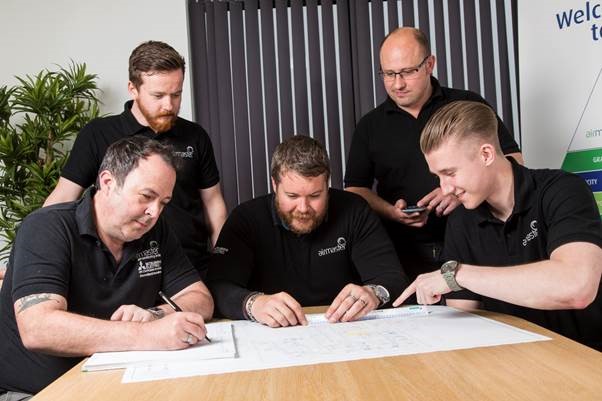 Airmaster, who work nationwide from their base in South Yorkshire with big-name clients like Not on the High Street and Morgan Sindall Group, turnover around £9 million with 35 staff.

Almost 100% of the Airmaster workforce have been apprentices in their careers, including founder director Richard Pogson and five of his six senior management team. Contracts director Gareth Campbell, became Airmaster’s first apprentice in 2000 when chairman Tony England joined to enable the next phase of growth.

“I joined Airmaster at 16 years old. I couldn’t wait to put my school years behind me and start using a hammer and any powered machinery I was able to get my hands on!” remembers Gareth. “Airmaster supported me to get on and encouraged fast learning and getting ‘stuck in’, which has taken me from tool-passer to contracts manager and now director. With hard graft, I’d say anyone has the opportunity to move their career forward at Airmaster. Coupled with great people, it is what makes it a fantastic place to work.”

Airmaster’s MD Lisa Pogson who has been with the firm almost since the beginning, starting as part time book-keeper is delighted. “We are all really proud of Gareth. Nineteen years ago he was an apprentice, now via different roles and learning the key aspects of the business, he has become one of our directors. What a great achievement for him- it just goes to show that hard work, dedication to quality and the expertise our team of brilliant staff offer all our clients really does pay off.”

Lisa concluded, “I started as an apprentice, so did most of our management team and staff. We are totally behind apprenticeships and as a company are heavily involved in many education initiatives from literacy in primary schools to STEM career choices in secondary schools and at University. We are delighted Gareth has been part of our successful growth. His recent promotion has also opened up an opportunity for an estimator and contracts manager so we are committed to continued expansion and ‘growing our own’ wherever possible.”