Proof of the pudding is in the giving 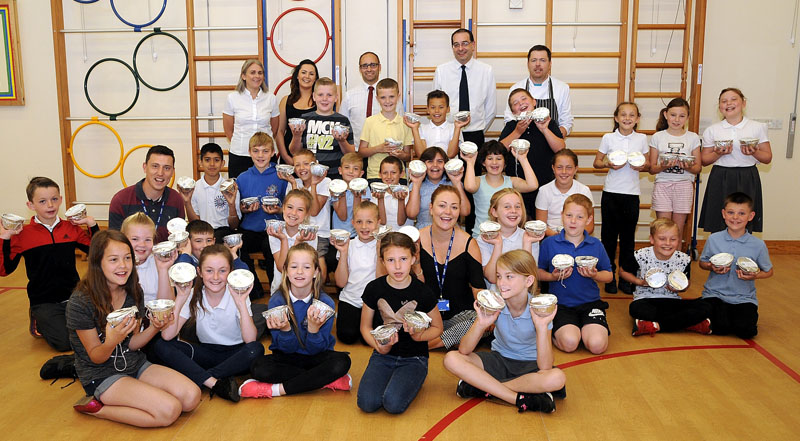 Proof of the pudding is in the giving

Christmas may be a very distant thought for most schoolchildren, but pupils at a Dinnington Primary School have been treated to an unusual culinary master-class as part of a Rotherham hotel’s annual Summer Santa Week: a special week of festivities with proceeds being used to support a local charity.

Staff at Rotherham’s Carlton Park Hotel invited over 30 year 5 pupils at Dinnington Community Primary School to learn the secrets of what it takes to create the perfect Christmas pudding. Pupils were given tuition by Head Chef Paul Spruce and his team, who taught the pupils how to weigh and mix the ingredients. After being cooked in the ovens at Carlton Park, the puddings will be stored away to allow the flavours to mature before being unveiled in November, when the festive treats will be decorated by the children ready for sale, with proceeds being donated to Rotherham Hospice.

The Christmas Pudding workshop is one of a series of fundraising activities currently being undertaken by staff at the hotel. Visitors are being treated to complimentary yuletide nibbles and are being asked to pledge a ‘Pound on the Pillow’ to support the Rotherham Hospice. A Summer Santa, complete with red coat and Bermuda shorts has also taken to the streets of Rotherham as part of the festivities.

“At this time of year many people assume Santa is taking a well-earned rest from his busy Christmas schedule, but for the past few years he’s decided to spend his holidays spreading goodwill across Rotherham!

This year, we chose to use our Summer Santa week to support the work of Rotherham Hospice. In the hotel industry, the Christmas period is one of our busiest times of the year and we felt our staff often miss out on the fun and the celebrations of the festive period.

It’s an idea which has captured the imagination of staff members and guests at Carlton Park Hotel who are hoping to raise as much money as possible to donate to the local charity.”

“Being a family-owned hub of the community, we feel a certain responsibility to give something back to the people of Rotherham who support us throughout the year; and what better way to do so than engaging in a week of charity work. The school children were enthusiastic and well behaved; I certainly got the feeling that there were a few budding chefs in the room!”

As well as creating festive treats in the height of summer, Carlton Park has also launched its Christmas Brochure which includes entertainment for all the family, including its first ever pantomime, Dick Whittington, which will take place at the hotel in December.