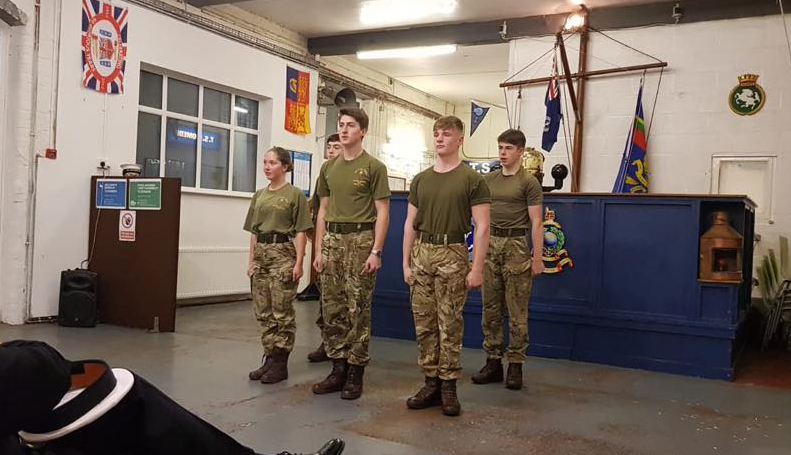 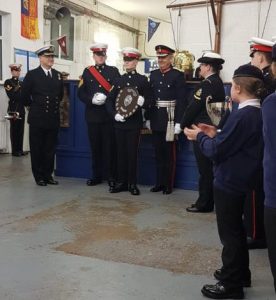 The evening started with a ceremonial drill display. Followed by an inspection where the area officer Commander Richard Delamere, the officers were overwhelmed with the hard work and dedication of the cadets.

After a fantastic inspection, the cadets presented their evolutions (a demonstration created completely by the cadets to show their skills and knowledge).

The first evolution was a display of seamanship. The cadets hosted a “I’m a Sea Cadet get me out of here” challenge where members of the audience raced against the clock to untie an official navy knot.
Swiftly followed by a Family Fortunes style Sea Cadet knowledge game where two teams went head to head to find the top answers for sea cadet related topics – first aid and communication.

Then it was over to the Royal Marines Cadets to show off their fantastic continuity drill and physical fitness through a choreographed routine to Eye of the Tiger, Heart of Oak, Immigrant Song by AC/DC and Life of the Ocean Wave

The finale was a band performance of Drum Colosseum, Highland cathedral and Sarie Marais
The cadets then were handed out awards for their hard work and dedication.

Leading Junior Cadet Elsworth was awarded the Best Junior Cadet for her fantastic work over the year and using her sea cadet first aid training to support a boy who had just been in a car accident.

The best cadet award went to Able Cadet Sargesson for his leadership skills, commitment and teamwork.

L/Cpl Alex McEwan was awarded the Commando Spirit due to his positive attitude, motivation and for always keeping team morale at a high.

L/Cpl Reece Smith was awarded the Best Royal Marine Cadet got high level of performance and achievement across the year.