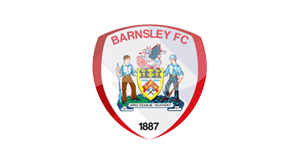 Barnsley Football Club is a professional association football club based in the town of Barnsley, South Yorkshire.

The team play in the Championship, the second tier of the English football league system.

The team play in the Championship, the second tier of the English football league system. Nicknamed “the Tykes”, they were founded in 1887 by Reverend Tiverton Preedy under the name Barnsley St. Peter’s. The club colours are red and white, and their home ground since 1888 has been Oakwell. In 2016, Barnsley won 2 Trophies at Wembley Stadium – the Football League Trophy, beating Oxford United 3–2 in the final, and the 2016 Football League play-offs, beating Millwall F.C. 3–1 in the final. Barnsley became the second club to secure both the Football League Trophy and Football League promotion via playoff finals in the same season, after Grimsby Town F.C.