Chamber raises over £500 for Charity of the Year

Chamber raises over £500 for Charity of the Year

Chamber members and charity supporters got their heads together and put their thinking caps on to help raise £560 for the Chamber’s Charity of the Year, City Hearts UK, at the annual Chamber Quiz Night. 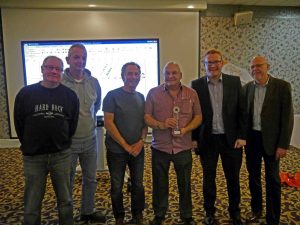 Champions ‘This Isn’t the Woodman’ and Quiz Master Dominic Beck

Taking place on 21st March, over 150 participants from 30 teams took part in the Quiz Night, first launched in 2017, to raise funds and give back to City Hearts UK; a local charity which provides support to men, women and children who have fallen victim to modern slavery. Funds were also raised throughout the night via a raffle and the Chamber’s Deputy Chief Executive Dominic Beck resumed his position as quizmaster for a second year.

The winning team, ‘This Isn’t the Woodman’ scored 59 correct answers out of 80, whilst losers ‘Hard Drives’ – consisting of employees from Rotherham based Open Network Services – took home the wooden spoon prize.

Diane Graham, Event Organiser said:
“We are once again overwhelmed by the support we have received from our members and supporters, who came together to help us raise funds for a highlight the work this inspirational charity does within the community.

“This is the second year we have hosted Charity Quiz Night and once again it was a huge success. We are already looking forward to next year’s event, where we will be raising funds for the winner of the Barnsley & Rotherham Chamber Charity of the Year award.”

Ed Newton, Managing Director of City Hearts UK, said:
“We are honoured to be the beneficiaries of the donations made from both the raffle and quiz. The £560 which was raised will go towards furthering the support we provided to the people in our care, who are recovering from the trauma of Modern Slavery.

“On behalf of everyone involved with City Hearts UK, I would like to thank everyone who took park and the Chamber staff who organised such a fantastic event and, of course, congratulations to team ‘This Isn’t the Woodman’ for winning first prize!”

The quiz consitisted of 7 rounds, with the chance to double points with a ‘joker’ round, allowing teams to test their knowledge to hit a high score of 80.

The Charity Quiz Night was kindly sponsored by Barnsley based Osborne Technologies, who supplied the latest touch screen equipment and technology.