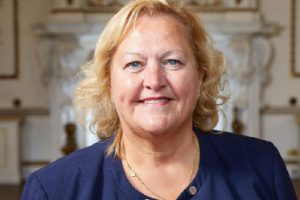 Julie Kenny, a former two-term president with the Chamber of Commerce in Rotherham, becomes a Dame Commander of the British Empire, the second-highest honour in the land, for her crucial role in securing the future of Grade I listed Wentworth Woodhouse.

As the chair of Wentworth Woodhouse Preservation Trust, Julie is its best-known unpaid volunteer. “I am amazed and humbled to receive this honour,” she said. “I was inspired by one of the greatest houses in the country and I did not achieve this alone; there were many people that helped me along the way and this award recognises our joint achievements.”

She described rescuing the house from decline as one of the most inspiring, yet hardest, challenges of her life.

Julie set up Rotherham security system manufacturer Pyronix in 1986 and grew the business into an award-winning organisation supplying 65 countries and was awarded her CBE in 2002 for services to industry in Yorkshire and Humberside. When she sold the company in 2016 its turnover was £25 million.

She has also acted as a government-appointed commissioner to Rotherham Council and was the first female chair of the British Security Industry Association. In addition she has served on numerous government bodies, is a Deputy Lieutenant, former High Sheriff of South Yorkshire and has won numerous awards, including Vitalise Businesswoman of the Year and PwC Private Businesswoman of the Year.

Current Chamber President Lisa Pogson commented, “Julie has been an amazing role model in the business community and in her public facing roles, many of which she has done on a voluntary basis.

“She always advocates ‘by giving back and helping people, you will be repaid ten-fold’.

“I have personal experience of her generosity of time and spirit, mentoring and support. She absolutely deserves this and for me it is for more than working with Wentworth Woodhouse, it is recognition of giving her time freely to business and the community.

“Truly one of our own done good. In fact, just brilliant.”