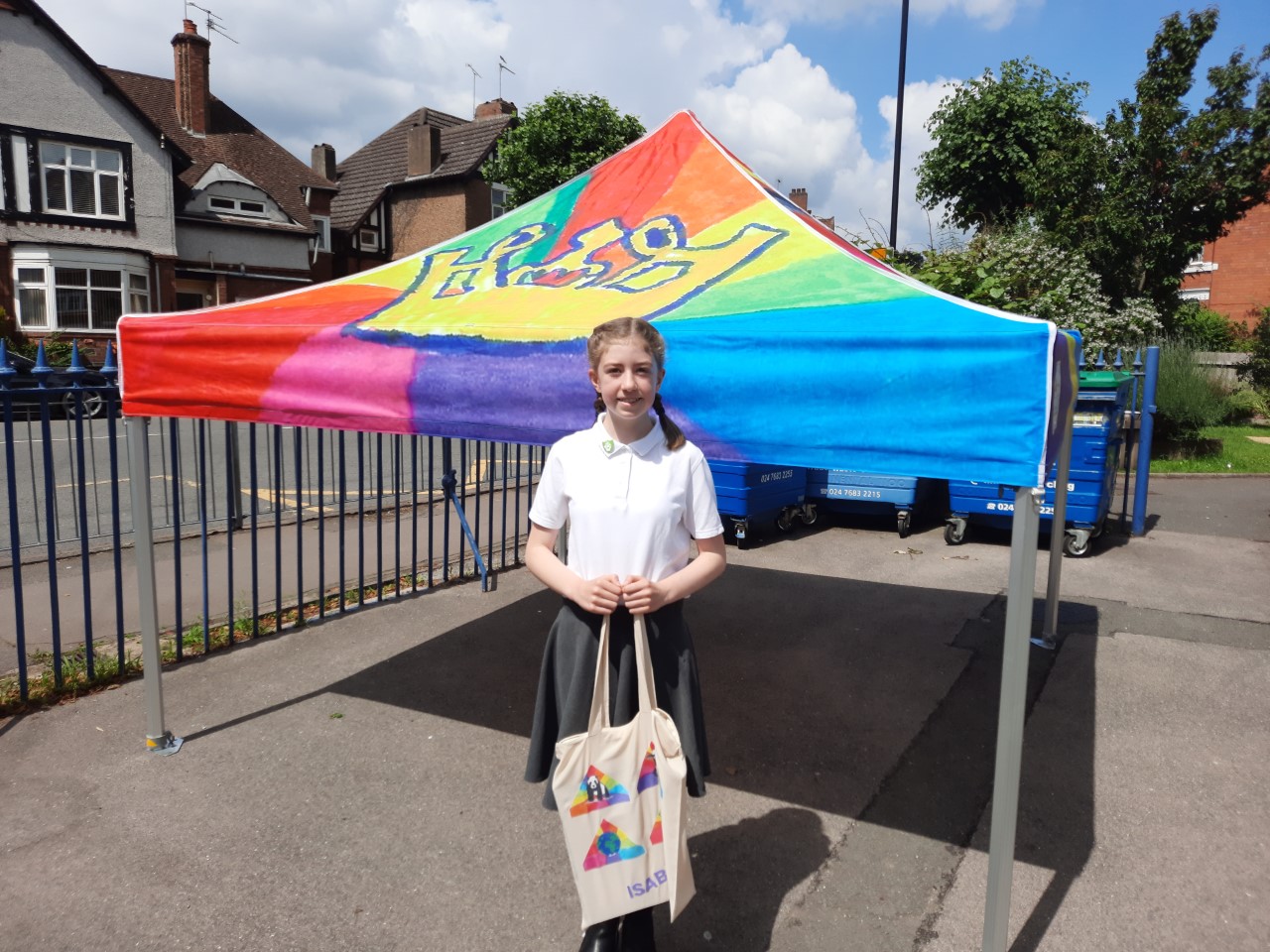 Some of the team from Rotherham-based Gala Tent have been on a tour of the UK over the past two weeks, personally delivering unique printed gazebos to schoolchildren whose designs had captured the nation’s imaginations and gained the most votes in the company’s design-a-tent contest, which had gone viral on social media.

Well in excess of one hundred designs were submitted across April and May, from primary schools across the UK, with the company directors quickly increasing the prizes on offer from one to three to ensure children from different age groups could be rewarded for their effort.

Six designs from each age group were shortlisted after a full afternoon of judging by company CEO Jason Mace, alongside graphic designers Samantha Davison and Bethany Liversidge, before the designs were put out for a public vote on Facebook.

The contest quickly gained huge momentum with teachers and parents canvassing through local press and radio stations to gain support. Around 20,000 votes were cast over the space of a week, and schools from Suffolk, The West Midlands, and Nottinghamshire were the eventual winners.

Gala Tent then quickly got to work on producing the prizes, which were a top-of-the-range Gala Shade Pro 50 gazebo with unique printed covers worth close to £700 each, and when they were ready, the Marketing Management team of Ryan Bracha and Nathan Lord set off on a mission to hand-deliver them, along with personalised goodies for the talented youngsters themselves.

7-year-old Sophie from Suffolk’s Carlton Colville Primary School was the first recipient of a prize. Her sweet animal-themed design was chosen from over a hundred designs submitted at her school, before it gained around 700 votes to win the youngest age group category (Reception Class, plus Years 1 and 2).

On what it meant for the school, Mrs Suzie Gray said, “We are so proud of Sophie for winning the tent for our school. When we heard that she had won, we made an announcement in a school assembly, and everyone was so excited as we knew we could put the tent to such good use. After a tricky year in school, hearing that we had won this competition was a great morale boost to staff and children.”

In the Years 3 and 4 age group, 9-year-old Freya from East Markham Primary School near Newark, Notts, achieved a massive 3,200 votes, becoming the most popular design of the whole contest in the process. The school’s Head Teacher, Mrs Laura Duggin, said, “As we’re a small school, our budgets don’t provide much cover for refurbishments and improvements, and we have recently had to manage crowd-funding and other fundraising events to get our new building opened. Our outdoor area is beautiful but it’s very open, so this much-needed tent will give our children somewhere nice to sit in the shade.”

The eldest children’s category (Years 5 and 6) was won by 11-year-old Isabel, at Coventry’s Earlsdon Primary School, who will leave a lasting legacy with her tent, as she’ll be heading to secondary school after the summer break. Her teacher, Mrs Michelle Andrews said, “It will make a world of difference. Due to budget restrictions, it’s something so useful that we would never have been able to afford to buy for ourselves, so we’re very grateful to be receiving it, and it is going to take pride of place on the school grounds, and as a city school we don’t have a great deal of space, so it will provide welcome shelter at our sports days on the local park.”

The contest was launched by Gala Tent to coincide with Children’s Art Week in early July, and was intended to bring some much-needed cheer to youngsters who have had a very difficult year and a half during the Covid-19 pandemic.

Company CEO Jason said, “It’s been a strange time for children, who have been forced to go against their natural urges to be tactile and they’ve had to remain distanced, as well as spending a lot of time at home when they’ve been supposed to be at school. We wanted to do something that might give them good memories of this part of their lives.”

Gala Tent Marketing Manager Ryan Bracha said, “Having spoken to the teachers at these three schools, it’s quite clear that budget cuts have really impacted the good that they can do, so while it’s been a positive experience for the children involved, winning such useful and high value products also makes a real difference to the schools themselves.”

After such a successful campaign, the Gala Tent Senior Leadership Team have committed to ensuring that their design-a-tent contest will become an annual event.

Gala Tent is the UK’s leading supplier of premium marquees and custom printed pop-up gazebos. Established in 1999, it has grown to regularly serve the NHS and Police Force, Armed Forces, Amazon, St John’s Ambulance, and even No. 10 Downing Street. Over the course of the Covid-19 pandemic, Gala Tent’s products have become vital equipment for organisations from many industries that require outdoor cover to ensure effective social distancing.