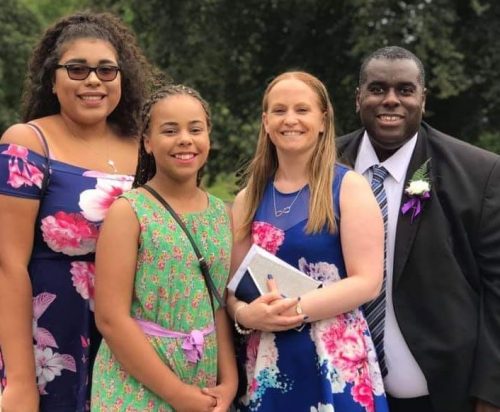 A man who lost his wife of fifteen years is paying tribute to the most “loving and caring” person he’s ever known by raising funds for Bluebell Wood Children’s Hospice in her memory.

Sarah Lewis, 36, from Harthill in Rotherham, died suddenly on March 12 after suffering what was thought to be a throat infection.

She was found by her husband Steve and 13-year-old daughter Megan on the sofa, unresponsive, after they returned from football practice. Despite attempting CPR, there was nothing they could do.

The mum-of-one tested negative for Coronavirus and was found to have died as a result of breathing difficulties caused by a condition called epiglottitis.

“She was the most loving, caring person I’ve ever known,” said Steve, 51, a former soldier who served for 23 years in the army.

“Every person she came into contact with just fell for her. She was such a lovely, softly spoken and kind person.

“She was the heart and soul of our family and she was my rock, supporting me when was on deployments to places like Iraq and the Falklands Islands. She was a very special lady and she was my true love. I really don’t have the words to do her justice.”

Through a fundraiser set up on facebook, the family have already raised over £1,000 for Bluebell Wood Children’s Hospice.

“Sarah always liked Bluebell Wood and she was very complementary of their work, and was a big family woman too,” said Steve.

“It only seemed right to make something positive out of her sad passing. It’s a very traumatic experience for us all – but we just want something good to come out of it.

“The fundraiser we set up really shows the outpouring of love and affection for her. People from all over the country, if not the world, shared incredibly kind words about Sarah and pledged money. The love people have for her is just unreal.

“If this fundraiser can improve someone’s life then that’s such a positive thing. That’s all we want to do now to honour Sarah.”

Sarah’s funeral is due to take place at All Hallow’s Church in Harthill on the 7th April, but because of the Coronavirus outbreak it will be limited to immediate family.

“We were going to have a big funeral to give all those whose lives Sarah touched the chance to say goodbye,” said Steve.

“For obvious reasons we can’t do that, which feels like another kick in the teeth. But once this is over, we’ll have a huge memorial service to make sure she has the send-off she deserves.”

Sam Wood, Head of Fundraising at Bluebell Wood, said: “We’d like to offer our deepest condolences to Steve, Megan and all Sarah’s family and friends at this incredibly difficult time.

“It’s clear from the outpouring of love for Sarah that she was a truly remarkable woman. We’d like to thank you all for thinking of Bluebell Wood at this time in such a wonderfully kind and moving way.

“Such generosity really does make a huge difference to some of the most vulnerable children and young people in our society, who need our help more than ever right now.”