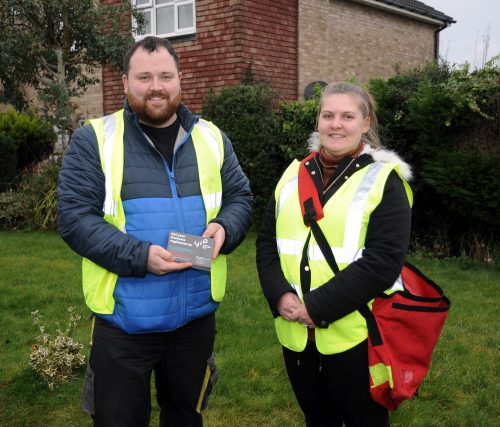 Developing a new business can be a little bit like waiting for a bus. Nothing happens for ages and then two arrive at once. When Conrad Kirk decided to leave his bus driving job last January, little did the Rawmarsh-based entrepreneur realise he would be at the helm of not one, but two successful businesses within just twelve months.

Keen to build a new career which allowed him to balance childcare commitments with his partner, the former area sales manager turned bus driver decided to draw on experiences from his former careers to pioneer a leaflet and distribution business.

Since taking the plunge into self-employment last January, from his initial 1,000 leaflet drops, Conrad and his team have delivered more than a million leaflets throughout Yorkshire during his first year of operations. Today, the company employs six permanent and fifteen casual members of staff after securing help for his business idea from the Launchpad programme, a unique initiative which supports aspiring entrepreneurs and new business owners which have been trading for less than three years.

Conrad hit on the idea of leaflet distribution as he realised the business could provide the flexibility in his working day to balance raising his young family. After trialling the idea and securing a number of small orders, the business moved from a bedroom office at home to a larger site in Mapplewell, Barnsley.

As the business grew, Conrad has invested in technology enabling customers to check when their leaflets have been delivered as well as sharing live data from his distributors including the speed they are walking and the areas they have visited in real-time.

Securing additional space wasn’t the only challenge faced by Evolution: larger leaflet deliveries meant larger quantities of packaging to dispose of. Sensing a fresh business opportunity, the new entrepreneur wasted no time in launching a second business aimed at recycling waste paper which is shredded and transformed into decomposable horse bedding.

Although Conrad’s focus remains firmly on growing and developing his distribution company, Ecolution currently processes over 20 tonnes of waste paper each month after securing partnerships with several schools within the Dearne Valley.

“Working as a bus driver gave me lots of time to reflect on my future. I had enjoyed a successful career working as an area sales manager previously, but felt guilty that I was unable to play a greater role in supporting my partner and our young family. We have four children under the age of four, including twins and I just felt there was a better way to earn a living. When I saw the advert for Launchpad, I realised it was a now or never moment and my ideas began to fall into place.

“At that time I had no real idea as to what my business would look like, but I wanted to realise a better work-life balance, and reduce our enormous outlay on childcare costs. I felt self-employment offered a golden opportunity to shape my future and since starting my own business I haven’t looked back.

“The biggest challenge I faced was securing new customers. I realised that whilst a small run of leaflet distribution would help me to test the idea, if the company was to grow to a point where I could earn a living from the business, it needed to be scalable. I took part in a number of workshops hosted by Launchpad which helped me to understand what’s involved with running a business, particularly when it came to understanding what’s involved when securing premises and  especially when employing other people, which can be a legal minefield.”

“Conrad is a natural entrepreneur who is always brimming with lots of different business ideas, but ultimately he wanted to achieve a better work-life balance, but to do this he knew he needed to secure larger orders but wasn’t sure how to access these.

“Through our one-to-one sessions, as well as taking part in a series of workshops, Conrad has successfully developed a robust business model which isn’t just helping to achieve a better lifestyle for himself and his partner, but after realising he was not alone in facing problems balancing childcare responsibilities with earning a living, he’s also helped others to return to the workforce.”

Launchpad is the Sheffield City Region’s key business support programme for new business. Financially supported by the European Regional Development Fund and delivered by local authorities within the Sheffield City Region and the Prince’s Trust, the programme provides free help and support to budding entrepreneurs in the City Region. Entrepreneurs who access Launchpad are those who are thinking of starting their own business or have started trading within the last three years. Further information can be found at www.scrlaunchpad.co.uk.